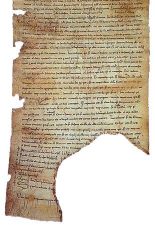 The “Placito Feretrano” is a parchment discovered by Annibale degli Abati Olivieri in 1749 in the Archives of the Republic of San Marino.

It is a poor copy, dating back to the XI century, of a previous document (dated February 20, 885). The dimensions are 360 x 650 mm, and it has been damaged by numerous lacerations which have rendered illegible four lines and ruined the bottom-right edge of the text.

This document has been under close examination by many scholars (from Cesare Manareso to the Swiss Paul Aebischer). Still today, there are many doubts about the complete authenticity of the text or eventual additions or insertions.

The “Placito Feretrano” relates of a controversy (a civil action which took place in feretran territory) between Deltone, Bishop of Rimini and Stefano, priest and Abbot of the Monastery of San Marino. Deltone maintained that Stefano usurped land, property of the Church of Rimini, which was situated on the west slope of Mount Titano.

The decision was entrusted to Giovanni, Bishop of Montefeltro, assisted by thirty or so jurists and judges who, after a long dispute, granted the victory to the San Marino Abbot. Stefano succeeded in proving that the Church of Rimini never possessed that territory; it was, therefore, officially acknowledged that the territories of Casole, Ravellino, Fabbrica, Petroniano, Pignaria, Griziano, Erviano, Laritiniano, Fiorentino, Silvole and Flagellaria belonged to the Monastery of San Marino.

This is the most ancient document remaining which proves the existence of a free and well-organized “civitas” on Mount Titano. Indeed, the “Placito” testifies that around the year 885, a castle in coexistence with the monastery, owner of cultivated farmland with a dense agricultural population, existed on Mount Titano.

Moreover, the document declared for the first time the independence of the territory of San Marino from the Church of Rimini and of Montefeltro.