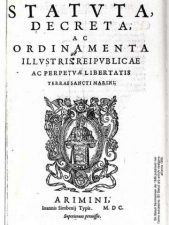 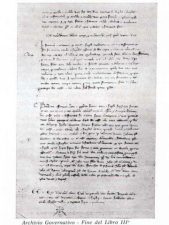 The principals of the traditions and of the institutions of San Marino are contained in the “Statutes”; or, more specifically, the “Leges Statutae Republicae Sancti Marini”.
The Statutes are a formal and solemn constitutional resolution which contains those principals which regulate the life of the Community under all aspects: institutional, occupational and in daily life.

The Statutes guarantee a form of political independence and represent a concrete testimony of the institutional evolution of the Community.

The most recent Statutes, still in force today, date back to the end of the 1500’s and are composed of six books written in Latin.

Besides determining the criteria for the regulation of the Country’s political system, the Statutes also, in part, regulate the formalities relative to the changing of the guards at the Public Palace (home of the Government), the ceremonies for raising and lowering the State flag, the “Palio dei Balestrieri e degli Archibugieri” (Crossbow and Arquebus contests), and other national holidays which commemorate important historic events.