The heart of the San Marino political scene and of its history. The Public Palace rises on the so-called “Pianello”; namely, Piazza della Libertà. It stands in the same place as the Domus Comunis Magna, built most likely between 1380 and 1392 and restored many times thereafter.

During the second half of the 1800’s, the appearance of the Palazzo Vecchio (Old Palace) was one of a building of the 1600’s. On May 17, 1884, the laying of the cornerstone of today’s palace took place. The design was that of the Roman architect Francesco Azzurri, President of the Academy of St. Luca in Rome; the work was carried out by local stone-cutters directed by the San Marino master mason, Giuseppe Reffi, utilizing stone extracted from the caves in Mount Titano.

The inauguration took place on September 30, 1894; the guest speaker was Giosuè Carducci who, on that occasion pronounced his famous oration on “libertà perpetua” (“freedom forever”). .

In recent times the Palace has been restored and restructured by the world-famous architect Gae Aulenti, in order to adapt it to modern requirements of functionality and safety; the inauguration ceremony took place on September 30, 1996.

The facade is richly decorated with numerous symbols: Coat-of-Arms of the Republic and of the four Municipalities (Castelli): Serravalle, Fiorentino, Montegiardino and Faetano. There are also the icons of the smaller localities annexed by the Republic over the centuries.

It is supported by three gothic arches; a central polygonal balcony with two large, decorated windows on each side, dominates the frontal view. The Coat-of-arms of the Republic is clearly visible between the two small windows of the mezzanine. The bell tower which rises on the left side of the Palace has the same battlements as the rest of the palace; it also bears images of Saint Agata, Saint Marino and Saint Leo positioned over the clock. In the corner, at the mezzanine level, there is a bronze statue of Saint Marino. Under the portico, to the right, there is a marble bust of the architect Azzurri, sculptured by Giulio Tadolini. 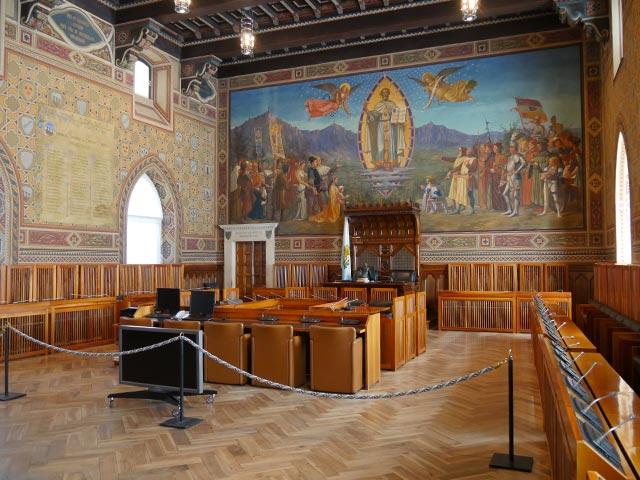 Inside the Palace, the walls of the entrance are covered with trophies, inscriptions, coats-of-arms, decorations and busts of famous men, not all of whom are San Marino citizens (for example, Giosué Carducci) but who have had an influence on the history of the Country. However, the real treasure which this Palace preserves is the Council Hall, located on the top floor and accessible by a stately staircase.
From 1848, the sixty parliamentarians of the Council have met on its benches.

The effigy of the founding Saint dominates the hall. The representation depicts the Saint surrounded by his followers: peasants, soldiers, scholars, women and children, listening to him while he admonishes them stating “Relinquos vos liberos ab utroque nomine” (I leave you all free one from the other). The Palace also contains the Hall of Congress and Receptions, the Hall of Elections, the windows of which which look out onto the Piazza and from which a spiral staircase leads to the terrace and to the bell tower.

The square in front of the Public Palace, called Pianello or Piazza della Libertà, covers ancient cisterns for storing rain water and once utilized as the water reserves for the population. The building, directly in front of the Public Palace, which housed the former post-offices was rebuilt in a XVI century style on the foundation of the Parva Domus of the of the city in the XIV century.

Visiting hours and prices may change.