Guaita, Cesta and the Montale Tower are the three “pinnacles”, simbol of Mount Titano, defensive bulwarks of the liberty, so sacred to the San Marino population. 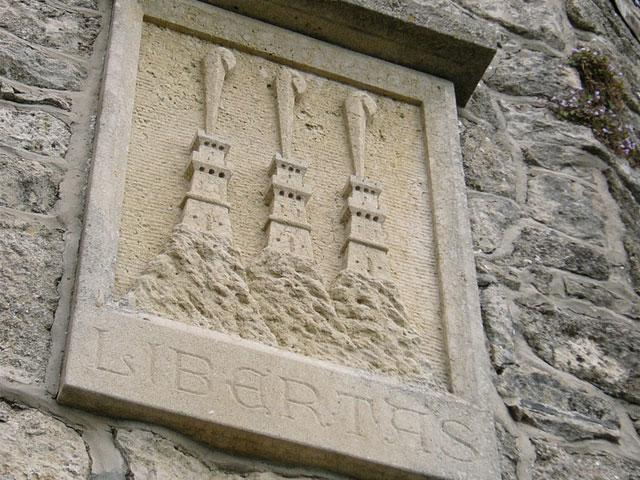 Built directly on the rock with no foundation, with a pentagonal base, dates back to the X century, it has, however, been reinforced many times in the past.

It was rebuilt in the second half of the XV century, in the sixteenth century has been covered with a sloping roof. It is called the “Rocca Guaita” and, within its solid walls, protected by double walls (the external wall with merlons and truncated towers at the corners), the population found refuge during sieges. Some parts of the tower were used as prisons up til October, 1970.

The baroque coat-of-arms in stone situated over the entrance is that of the Republic and dates back to the 1600’s, before that it belonged to the Palazzo Pubblico (Public Palace). The internal wall stops at the Bell Tower on one side and the Pinnacle Tower on the other; these elements were built centuries later. The upper entrance door, which can be reached by a staircase, is protected by a small wooden construction of 1481. The courtyard contains some pieces of artillery from the Second World War: two mortars, a gift from Vittorio Emanuele II, two 75mm canons fired by the Guardians of the Rocca during national festivities, a gift of Vittorio Emanuele III.

Visiting hours and prices may change

On the second, and highest pinnacle of Mount Titano, 756 meters high, we find the Cesta Castle (also called Fratta). Built at the end of the XI century, this too has a pentagonal floor plan. The Second Tower housed the Fortification Guards Division as well as some prison cells.

Around the end of the XVI century, when the tower was no longer of strategic importance, it fell into disuse. In 1930, as a result of the construction of the Rimini – San Marino railroad, it was decided to restorate the medieval monuments in order to stimulate turism.

OToday the Cesta Tower houses the Museum of Archaic Arms, which contains approximately 535 pieces including: sidearms, spears and lances, firearms, bows and arrows, crossbows and coats of armour, all dating back to various periods from the Middle Ages to the end of 1800. The rest of the collection, which totals more than 1550 pieces, can be found in the “Center for the Study of Military Arms from the Middle Ages to the 1800’s” in Borgo Maggiore.

Visiting hours and prices may change

The Third Tower called Montale dates back to the end of the XIII century. this is the smallest of the towers; however for defensive purposes, this tower played a strategic role: it has the best position for a look-out post.

The fortress, with its pentagonal floor plan, has been restored on numerous occasions during the course of the centuries; the last restoration took place in 1935. Inside there is a prison 8 meters deep, called “the bottom of the tower”. Montale is surrounded by very large and ancient rocks arranged to form a primitive wall structure.

The section of wall, which extends from the Second Tower to the parking area of the ancient cave, belongs to the remains of the second surrounding wall and was built in the XIII century. In fact, the City of San Marino was fortified by three enclosing walls, built in three different periods; most of which have, in the meantime, been torn down to permit the expansion of the city.