Among state museums and private museums, San Marino has 12 museums , and 5 of them are public.
The repertory goes from ancient weapons eighteenth century, the wax figures through the curiosity and the instruments of torture: San Marino is an interesting destination for all types of tourists, lovers of art and archeology to the curious looking for extravagant collections.

Here are all the museums in San Marino: 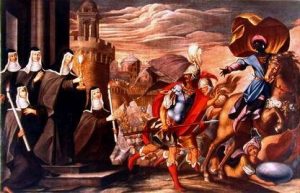 Santa Clara against the Saracens, unknown painter from Marche

The museum houses many donations and purchases, a collection of art that began to take its first steps since the second half of the nineteenth century.
Opened in 1899, today is located in Palazzo Pergami Belluzzi. 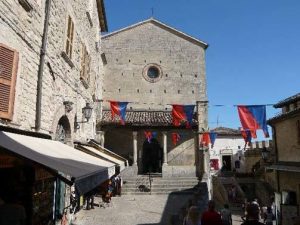 In San Marino City – via Basilicius – is located the Museum of San Francesco. Even the place is worth the cost of the ticket: a beautiful cloister of the 1400.
The museum has two sections: a sacred art and an art gallery.
Paintings on canvas and wood, furniture and furnishings that come from a number of Franciscan churches tell the presence of religious in the Republic and the fundamental role they have had in its history.
The sculptures and paintings by the artist Emilio Ambron (XX century) complete the collection.

Inside the San Marino City, via Salita della Cesta, you reach the Museum of Ancient Arms.

Opened in 1956, is located in the second tower. It hosts thousands of weapons, including 2 thousand swords, crossbows, knives and weapons. In addition there are firearms and fancy experiments, such as the dagger-gun dating back to 1730, two-handed swords and guns with double triggers and barrels.
The museum has 4 rooms.
Sito web

Gallery of Modern and Contemporary Art

It is located in via Eugippo in San Marino City and can boast among its first visitors the great Sicilian artist Renato Guttuso. Opened in 1956 during the first Biennale in San Marino, it hosted the works of art of over 500 artists. It currently houses nearly 800 works relatively young (early ‘900), not only paintings but also beautiful photographs and sculptures.
Sito web 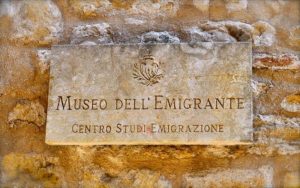 The youngest museum in San Marino town is Emigrant Museum – Permanent Study Centre on Emigration. Opened in 1997, is housed in the Monastery of St. Clare, in Contrada Ombrelli. Was created by the council of San Marino citizens abroad and aims to remember the stories of people who left San Marino. A permanent study – with photographs, documents etc. – which seeks to investigate the migration of the inhabitants of San Marino.
museoemigrante.sm